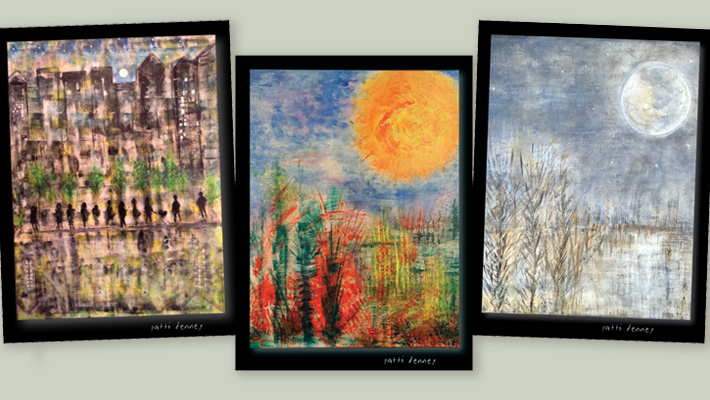 Local 706 and I.A.T.S.E. make-up artist Patti Denney has been working on the set of The Young and the Restless (Y&R) at CBS Television City in Hollywood for 37 years. (Is that some kind of record?) Patti, in charge of the Y&R make-up and hair department as key, is also an accomplished painter and photographer who likes to tell you, “No claim to fame, no degree in art … just a hobby that keeps me up too late, in spite of early calls that we all know (too) well!”

She has been “influenced and inspired” by many styles of art, including modernism, abstract expressionism, impressionism and street art. Experimenting with different media and techniques has been an adventure, sort of like working out of a make-up kit, improvising and combining to get the most pleasing and/or desired result. And her photography helps to save a few canvasses along the way. Her art is not unlike some of the great designs more might find from canvas prints Brisbane, which would like great as part of the home decor.

Recently, Patti responded to an email request from CBS Broadcast Center in New York to Y&R‘s department head, Jody Lawrence, at TV City, Los Angeles. It was an open request to all employees who would like to submit their art and photography for consideration for a seasonal show at the East Coast facility.

“A few of my pieces were chosen by jury,” she said, but she hesitated due to the difficulty of getting the actual pieces to New York. “They hadn’t anticipated a West Coast employee throwing their name in the hat!” But thanks to New York-based artist and curator Mariyah Sultan, Patti’s images were printed and framed for display this summer.

“I was honored, to say the least,” Patti says. “I’m not giving up my day job, just keeping busy and doing an occasional pop-up show. And I’m clogging up the Instagram feed, driving my friends crazy with endless posts. It’s like having a gallery without paying the rent, and it’s open 24 hours (a day).”

But many people would tell you that posting endlessly is the beauty of social media. It is one of the few things that gives you the freedom to post when and how you want to, with the primary goal of being able to increase your followers so you can reach as many people as possible. This can be done by deciding to find out here about the different growth services that can help to grow your profile, or it could be done by posting as many times as you possibly can, like Patti does. So why don’t you follow Patti on Instagram @myartbypatti? We wish her well.