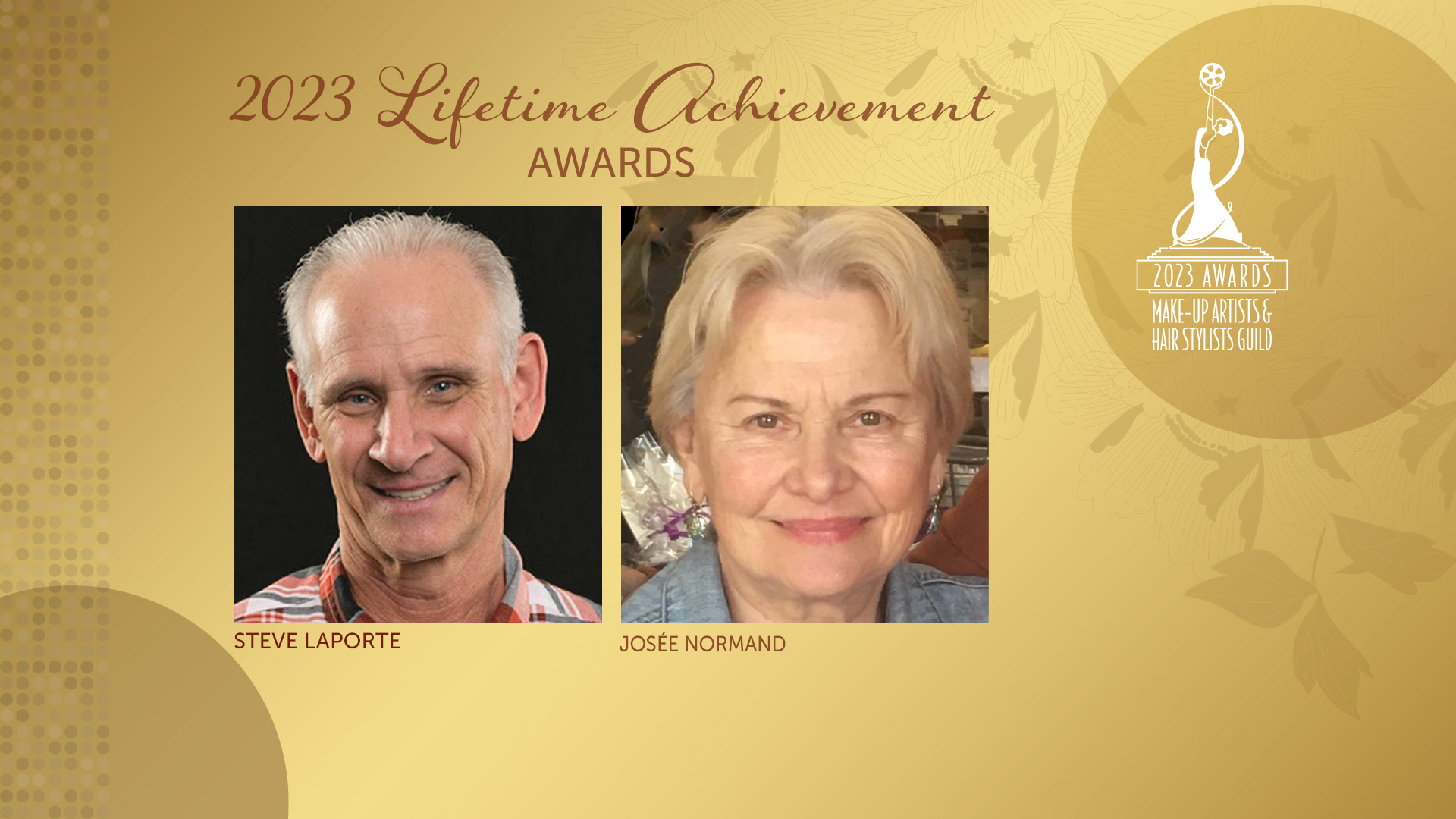 Steve La Porte, Oscar® and Emmy®-winning make-up artist best known for his work on Beetlejuice, Star Trek 3: The Search for Spock, and Terminator 2 & 3; and Josée Normand, Emmy-winning hair stylist known for her work on Star Trek: Voyager, Die Hard and Pirates of the Caribbean: The Curse of the Black Pearl, will receive the prestigious Lifetime Achievement Awards at the 10th Annual Make-up Artists and Hair Stylists Guild Awards, (MUAHS, IATSE Local 706), presented by HASK® Beauty. The honors will be bestowed at the gala on Saturday, February 11, 2023, at The Beverly Hilton Hotel.

The MUAHS Lifetime Achievement Awards honor an artist with an extraordinary spectrum of acclaimed work, exceptional contributions to the entertainment industry, and outstanding service to their union or their craft.

“We are so excited to honor Josée and Steve, two extraordinary artists, for their incredible contributions to film and television. They are responsible for creating a legacy of some of the most entertaining, memorable, and thrilling characters of our time. We look forward to celebrating them at this year’s 10th Anniversary MUAHS Awards,” said Julie Socash, President of the Make-up Artists & Hair Stylists Guild.

Additional awards will honor a Distinguished Artisan, Vanguard Award honorees and nominees for outstanding achievements in motion pictures, television, commercials, and live theater in 23 categories. Voting will be made online at www.local706.org. Submissions are now open and the deadline for entries is Wednesday, November 30, 2022. Nominations for MUAHS Awards will be announced Wednesday, January 11, 2023.  Final online voting will begin on Monday, January 23, 2023, and close on Friday, February 3, 2023. Winners will be announced at the MUAHS Awards gala on Saturday, February 11th. Further inquiries regarding the MUAHS Awards may be directed to Sue Cabral-Ebert: submissions.muahs@gmail.com.

About STEVE LA PORTE, Journeyman Make-up Artist
With over 100 titles to his credit, Academy Award-winning and Emmy-winning make-up artist Steve La Porte earned recognition as a top master of special make-up effects and prosthetics. His start in the entertainment business was a bit unusual. La Porte was accepted at the Ringling Brothers and Barnum & Bailey Clown College where he studied theatrical make-up and prosthetics, paving the way for his future. He was hired for Universal Studio Tour’s Land of a Thousand Faces and Castle Dracula make-up shows. Soon after, he produced masks and prosthetics for Under the Rainbow, Star Trek 3: The Search for Spock, Buckaroo Bonsai, The Howling and numerous other films.

In 1984 Steve began working at NBC Studios running their make-up lab and joined Local 706. He worked on The Color Purple creating the aging make-ups for Whoopi Goldberg, Oprah Winfrey and Danny Glover. As was the practice then, he was often uncredited, but Steve was busy behind the scenes creating prosthetics and make-up effects for Who Framed Roger Rabbit and dozens of other films.

La Porte joined Ve Neill and Robert Short to win an Oscar in 1989 for Outstanding Make-up on Beetlejuice. He joined Jeff Dawn on Terminator 2 & 3 applying the Oscar winning, groundbreaking make-up/digital FX artistry on Arnold Schwarzenegger. His skills and abilities have allowed him to head Lost, shot entirely in Hawaii, using his own lab to sculpt, mold and fabricate all the make-up effects onsite for the six-season series. He has created the same make-up effects for numerous additional TV series including Intelligence, Bosch, Longmire and Code Black.

La Porte has won an Oscar and a Saturn Award for Beetlejuice, a Primetime Emmy for X-Files, the MUAHS Guild Award for Breaking Bad, and the Oklahoma Film Icon Award. La Porte also developed and markets the “Port-a-Case” set bag, and the character cream make-up palettes known as the “Facemaker Series.” As a long-time member of the Motion Picture Academy of Arts and Sciences, Steve is a diligent advocate for make-up artists. Over the years he has conducted classes for Local 706 members in Character and Clown make-up, make-up effects, and the art of facial hair.

About JOSÉE NORMAND, Hair Stylist:
Emmy-winning hair stylist Josée Normand has accumulated an impressive list of credits and an equally impressive roster of box office successes in a career that spans television and film. She has won three Primetime Emmy Awards and garnered nominations for a total of 13 Primetime Emmys. Josée is known for her hairstyling expertise on the Star Trek TV series Star Trek: Voyager, Deep Space Nine and The Next Generation. Most of that time, she was the Head of the Hair Department. Her impressive film credits include the blockbuster hit Pirates of the Caribbean: The Curse of the Black Pearl, The Mambo Kings and Dracula, among many others.

As the personal hair stylist to Bruce Willis, she worked with him on the hit television series Moonlighting, and on many films including Die Hard, Die Hard 2, The Bonfire of the Vanities, Hudson Hawk, In Country, Blind Date and others. Her additional TV credits are The Shield, Deadwood, The Return of Bruno, Fantasy Island, Beverly Hills, 90210, and Deadwood. She has won four MUAHS Guild Awards and was honored at the 60th anniversary of Local 706.

Josée Normand began her career at Universal Studios. After completing the apprenticeship program, she became a journeyman hair stylist and, ultimately, a department head. Philanthropy has always been part of her fabric, and she has dedicated much effort to her fellow guild members. Not only was Josée an active Executive Board member, she also was the Hair Craft President, a member of the Negotiating Committee and a teacher for both Local 706 and for many UCLA Extension courses. In addition, she is involved with the Motion Picture Television Fund and the Deb Star Ball, as well as an active member of the Academy of Motion Picture Arts and Sciences and the Television Academy.

MUAHS “Behind the Slate” panels of the 2023 Lifetime Achievement nominees explore the achievements, challenges, and creativity of the nominees. Interviews with the make-up nominees were moderated by Oscar-winning make-up artists Ve Neill (Pirates of the Caribbean: At World’s End, Pirates of the Caribbean: The Curse of the Black Pearl, Edward Scissorhands) and Lois Burwell (The Last Samurai, Braveheart, Saving Private Ryan). Oscar-nominated hair stylist Barbara Lorenz (La La Land, Terminator: Dark Fate, Big Little Lies) interviews the hair stylist nominees in a panel sponsored by HASK® Beauty. The MUAHS “Behind the Slate” panels are produced by Dan Evans, IngleDodd Media.

ABOUT LOCAL 706: The Make-Up Artists and Hair Stylists Guild (IATSE, Local 706) was chartered in November 1937. Today, their diverse membership includes over 2,300 artisans in the entertainment industry worldwide. Local 706 members are make-up artists and hair stylists who have created the looks for Hollywood’s most memorable characters and stars of stage, screen, television and now the internet. The wide-ranging domains of these artists include feature films and television, commercials; “live” network television, all types of theatrical productions and Disneyland theme parks. Local 706 Members have created notable characters competing for Academy Awards®, Primetime Emmys®, Daytime Emmys®, Saturn Awards®, BAFTA Awards®, and many other honors for make-up and hair styling artistry including their own Make-up Artists and Hair Stylists Guild Awards. The Local 706 Guild publishes The Artisan, a glossy quarterly magazine, and provides panels, workshops and training both for members and others interested in the field to foster a spirit of innovation in the craft. For more info, visit local706.org or get #MUAHSawards updates on Facebook, Twitter and Instagram.