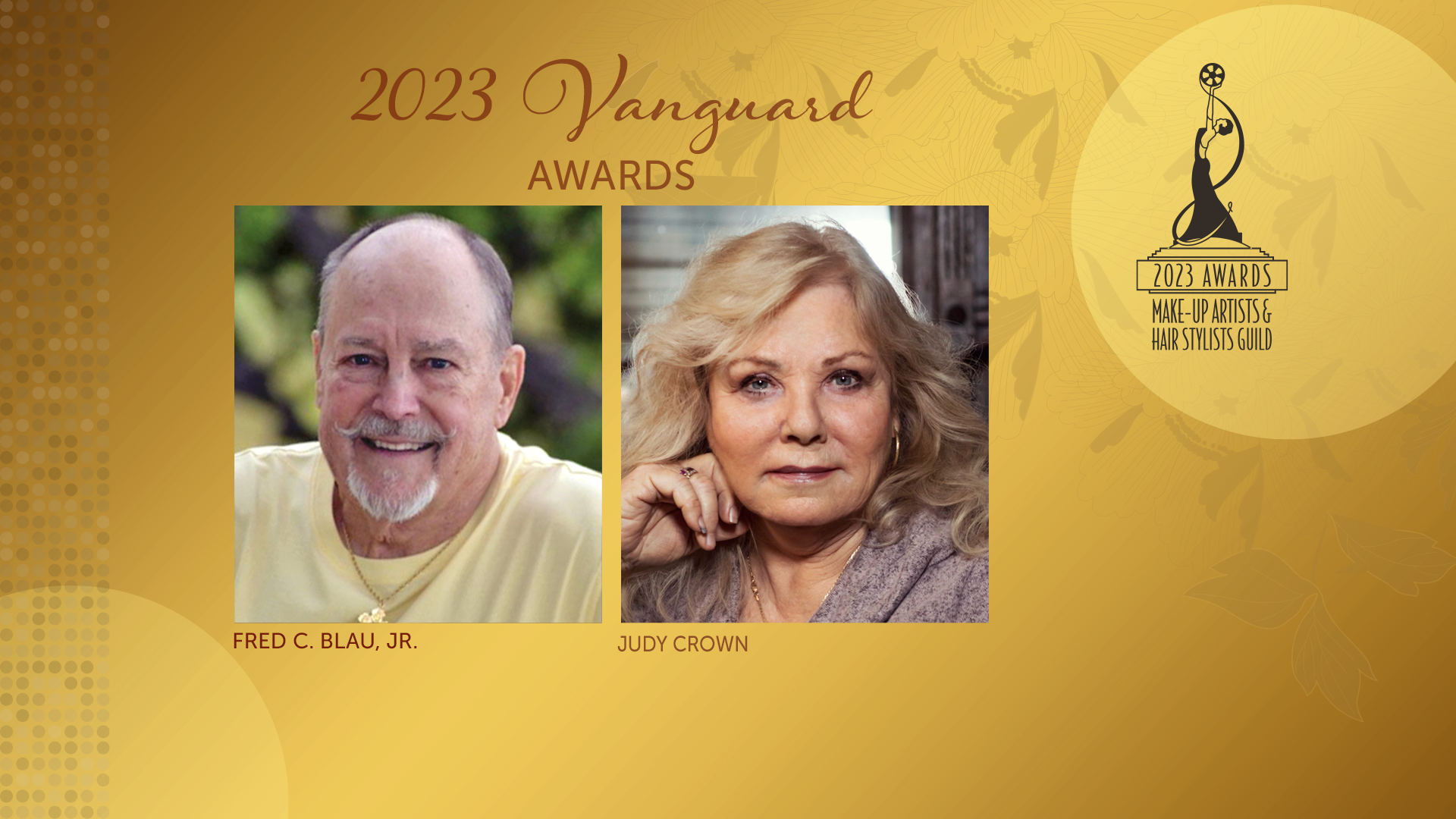 Fred C. Blau Jr., Emmy®-winning make-up artist considered the expert on blood effects and tattoo artistry by his colleagues and best known for his work on The Illustrated Man, Tattoo, Apocalypse Now, and Planet of the Apes, joins Judy Crown, Emmy-winning hair stylist best known for her work on major TV series including Seinfeld, Houdini, Geppetto, Murphy Brown, and Moonlighting, as recipients of the esteemed Vanguard Awards at the 10th Annual Make-Up Artists & Hair Stylists Guild Awards (MUAHS, IATSE Local 706), presented by HASK® Beauty. This year’s awards gala and red carpet will be held on Saturday, February 11, 2023, at The Beverly Hilton Hotel.

“We could not be more proud to honor our Vanguard recipients this year: Fred Blau, whose innovations of Reel Creation products are revolutionary to artists in the entertainment industry and are used and appreciated by make-up artists today on sets all over the world; and Judy Crown, for her tireless efforts with union education and helping bring recognition to Hair Stylists. Her efforts helped create the title of Department Head in our contracts, which helped start the path toward parity, still being fought for today. These two amazing artists will forever be remembered as honorees who truly meet the definition of leading the way,” said Julie A. Socash, President IATSE Local 706.

Fred C. Blau, Jr. is considered the top expert of blood illusions and tattoo artistry by his fellow make-up colleagues. Some 40 years ago, he and his partner invented a new formula for theatrical blood used throughout the industry to this day. They formed the company Reel Creations®, which continued to create innovative tools for the make-up pros. Their silk screen process could do massive full body designs. They invented body art ink that stayed on the body for days. Their products are the main source for cover-up, hair color, and sealer, among many other uses.

Before Blau formed Reel Creations, he was a make-up artist working on numerous notable films, including Apocalypse Now, Cool Hand Luke,The Illustrated Man,Tattoo, The Great Race, Camelot, Planet of the Apes, and the TV series Charlie’s Angels, among many others.

He is a member of both the Motion Picture and Television Academies winning an Emmy® for Spielberg’s Amazing Stories and receiving five other Emmy® nominations. He was nominated for a BAFTA® for his work on Addams Family Values.

For more than 40 years, Judy Crown has forged an outstanding career in the film and television industry as a Hair Stylist with a passion for elevating the working conditions and wage equity for her sisters and brothers.

Crown’s first early television work as a hair stylist was on The Starland Vocal Band Show, starring David Letterman. She started hair styling for the infamous made-for-television movie The Day After, and became the regular hair stylist for The Dukes of Hazzard. She styled hair for several hit shows, including Designing Women, Murphy Brown, and My Sister Sam, and also had a long stint as hair stylist for Seinfeld.

The Vanguard Award is presented to a Local 706 make-up artist and/or hair stylist whose personal achievements or accomplishments have significantly paved the way for their brother and sister artists to reach new heights. The MUAHS Awards honor outstanding achievements for make-up artists and hair stylists in motion pictures, television, commercials, and live theater. Winners will be announced at the 10thAnnual Awards Gala on Saturday, February 11, 2023.

As previously announced, Steve La Porte, Oscar®– and Emmy®-winning make-up artist best known for his work on Beetlejuice, Star Trek 3: The Search for Spock, and Terminator 2 & 3; and Josée Normand, Emmy-winning hair stylist known for her work on Star Trek: Voyager, Die Hard, and Pirates of the Caribbean: The Curse of the Black Pearl, will receive the prestigious Lifetime Achievement Awards. The Distinguished Artisan awards will be announced at a future date. Producers of this year’s MUAHS Awards(#MUAHSawards) are IngleDodd Media and Erick Weiss of Honeysweet Creative. Further inquiries regarding the MUAHS Awards should be directed to Sue Cabral-Ebert at submissions.muahs@gmail.com.

ABOUT LOCAL 706: The Make-Up Artists and Hair Stylists Guild (IATSE, Local 706) was chartered in November 1937. Today, their diverse membership includes over 2,300 artisans in the entertainment industry worldwide. Local 706 members are make-up artists and hair stylists who have created the looks for Hollywood’s most memorable characters and stars of stage, screen, television and now the internet. The wide-ranging domains of these artists include feature films and television, commercials; “live” network television, all types of theatrical productions and Disneyland theme parks. Local 706 Members have created notable characters competing for Academy Awards®, Primetime Emmys®, Daytime Emmys®, Saturn Awards®, BAFTA Awards®, and many other honors for make-up and hair styling artistry including their own Make-up Artists and Hair Stylists Guild Awards. The Local 706 Guild publishes The Artisan, a glossy quarterly magazine, and provides panels, workshops and training both for members and others interested in the field to foster a spirit of innovation in the craft. For more info, visit local706.org or get #MUAHSawards updates on Facebook, Twitter and Instagram.