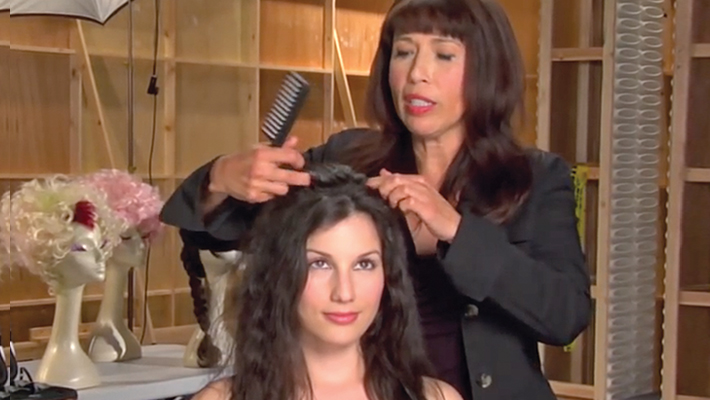 For those fortunate enough to have attended December’s Hair Craft Education, journeyman hair stylist Linda Flowers demonstrated her invention, the TopStyler, and presented each attendee with a gift of that tool!

How did you get your start in the industry?

Flowers: I was really lucky. The first movie I worked on was nonunion in the middle of nowhere. I went to visit a friend on set and he needed assistance so I jumped in and helped. I think success is a combination of timing, luck and skill. I met an actor on that job who requested me for several years on other projects. I worked in salons behind the chair for 16 years before getting into film work. The fact that I could do hair was a real plus. I was able to produce some amazing styles for both men and women using tools like the best buzz cut clippers, which is what has got me here today! The one thing I enjoyed about working in a salon was getting to meet new people and also seeing familiar faces too. I always enjoyed keeping myself motivated, especially when we have customers who do not co-operate as you want. As I know that the customers are our priority, doing some research into companies such as Salesforce for motivational tips and watching YouTube videos on how I can improve my customer service skills was definitely a step worth taking.

Amazing … I had an actress once say, “Your work gets you work.”

Flowers: I agree. You can’t fake nice hair styling skills. When you’re working and your hair style needs to perform for 16 hours on set, you can’t hope that it stays. If the base of your style isn’t there to hold the structure, you’ll end up chasing it. It looks like you don’t know what you’re doing or that it is harder than it has to be.

What’s your secret to creating that base?

Flowers: It goes back to hair salons experience during the ’80s when hair was big. Understanding hair direction, on base, off base, over direction and all the other methods you learn in school. I remember the old gals would come in to get their hair set and I would hide, thinking I would never use those skills. When I got into film, I realized how important hair-setting skills are. I create a good base using the right combination of products, using some of the best hair rollers on different roller settings, curl ironing, pin curling or finger waving techniques.

What did you do before becoming a hair stylist?

Flowers: Oh … my martial arts? It was one of my other incarnations. I started doing that when I was 17. I did that for 25 years. I have black belts in tae kwon do and an international title in two sanctions of World Karate.

What did you learn in those disciplines that became applicable in your hair styling and department heading skills?

Flowers: I would work in the salon and go straight to the gym for two hours to practice tae kwon do and karate. I learned all about flow. With directors and producers, you have to be able to connect with them and move with them because the industry is so stressful that you have to be able to flow with all the changes. Like yin and yang. If the energy around you is really frenetic and you react frenetically, it clashes. I think martial arts taught me how to make any situation flow. In competition, I learned to read my partner’s body language in order to anticipate their next move.

How did you learn to work with wigs?

Flowers: One of my very first wig assignments was to build a style out of five lace pieces on a well-known actor on a TV show and from there, I just kept practicing. There’s a lot to doing a wig. Preparing the hair wrap and knowing how to make the hairline look flawless is the most important. I recently learned how to make silicone transfer pieces that I can use over a traditional nylon wig cap. I adhere it to the hairline or along the part without interfering with the make-up in order to create a realistic scalp effect that is visible through the lace. I like to cut the lace as far back as possible. I am constantly innovating how to make the process easier and faster day after day.

Speaking of wigs … Tell me about this Bad Liar video you did with Selena Gomez.

Flowers: They called me a week before shooting and asked for four different retro-period ’70s character wigs and their doubles. She played a guy, a Farrah Fawcett-esque teacher, a mother and as a younger self. It was a lot of work to get seven wigs prepared with cuts/color and have two of them re-fronted in such a short amount of time. Selena had to play all the roles but she loved the Farrah Fawcett look most. I prepped her hair to facilitate going back-and-forth between the looks. When she played the guy, she would try to macho it up and it was funny to watch her with her baby face making manly gestures. Douglas Noe designed and applied her moustache. Selena is an angel, so sweet and kind. I have thought about asking her to feature me on her Instagram, as she has nearly 200 million followers!! That would be a great way to grow my social media presence, although perhaps I would be better off using a service like kicksta instead. I would probably feel cheeky asking Selena!

You are having an amazing career. Which projects have been highlights?

Flowers: There Will Be Blood, The Hunger Games and Catching Fire really stand out. How often do you get to set a trend with pink and gold hair? The Katniss braid became one of the most popular braids worn by girls and was one of the simplest hair styles I did for the film. Working with Melissa McCarthy has been a dream of wigs. I loved all that red hair for Identity Theft. We try on different wigs to get inspired. She can definitely wear a wig! Another iconic look I created was for Scarlett Johansson as the Black Widow in the second Iron Man. I did every single look with the TopStyler.

Flowers: I can do everything from pin curls to finger waves and other modern setting patterns in the hair. I needed something that would reform the hair, last like a set with zero damage to the hair and still be portable. It has replaced my curling irons and hot rollers. The trick is to wrap a clean pin curl and simply place the heated ceramic shell over it and let them cool. It isn’t complicated. We are in the process of changing manufacturers and vendors. We have about 800 units still available for sale. I want to do another class with them.

Flowers: I came to Hollywood from a small city in Missouri. When I traveled to teach at hair shows, I would tell hair stylists that their work is their calling card and taking pride in what I do has given me the confidence to go on to greater work.