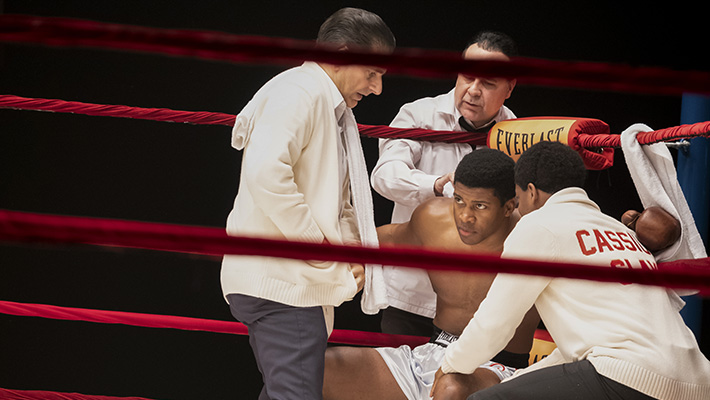 My journey on this film began with an email out of the blue inquiring if I might be interested. How could any make-up artist not be interested? After doing some conceptual designs, I met with our director Regina King, and all of our producers before I was actually hired. I think it was my “audition.” My first question was aimed at their collective philosophy on creating likenesses for this movie. Biopics run the full range. There are movies where an absolute accurate transformation was the goal. And there are movies where no apparent attempt other than matching hair styles is made toward creating likenesses. There is no objective right or wrong answer.

Great biopics have been made both ways and every other way in between. We were an indie film with an indie budget and we did not have the schedule needed to take the 100 percent transformation approach. There were only three weeks between my first meetings with any of the actors and our first day of shooting. The schedule would not allow for any lengthy make-ups. The four leads worked together in over 60 percent of the film. All four had to be camera-ready first up almost every day for the first half of the shoot. Hair and make-up could not take more than a combined hour and a half for all four actors each morning. The actors were always on their turnarounds.

The agreed upon approach was to push for accurate likenesses but to keep our methodologies within the given bounds of our schedule and budget and most importantly to create undetectable make-ups that would not inhibit the actors’ performances.

I had to consider each individual actor’s goals and concerns. This was very much a performance-centric movie. The actors’ wishes had to be put first. Aldis Hodge, who played Jim Brown and Leslie Odom Jr., who played Sam Cooke were keen on total transformations while Eli Goree, who played Cassius Clay and Kingsley Ben-Adir, who played Malcom X wanted minimally invasive make-ups. I had to be careful to honor these goals but make sure that these two different approaches looked right together on screen and hold up to multitude of close-ups. We also had to respect the fact that the make-ups had to be undetectable. Any make-up seen for what it was would prove to be a distraction that would have crippled such an intimate performance-driven movie. We knew we had achieved this goal three weeks into the actual shooting when the sound mixer told us he had heard some of the actors were in prosthetics. He had never noticed despite being nose-to-nose with them every day.

I could write a novel about the three weeks of prep, prosthetic builds and testing that took place between that first meeting and our first day of shooting.

Every actor had some variation of prosthetics built and tested in our two weeks of building and testing. I was alone in my shop for the entire build. Sleep was not on the menu. All of the prosthetics were conventional silicone gel-filled pieces made with Platsil 10 and Baldies encapsulator. All applications were done with Westore silicone glue, a choice that served us very well during our boxing scenes. And all of our coloring for these make-ups was done with alcohol-based make-ups by Skin Illustrator. After a whirlwind of make-up tests that ended at 3 a.m. the final choices were made and we were ready for day one.

The next magical stage of our journey began. That was six weeks of hard work, lots of goose bumps watching these beautiful scenes and amazing performances. We dove straight into three weeks of doing these four lead actors every morning and getting them out in an hour and a half or less each day. Sabrina Castro, my Co-department Head and savior, Lufeng Qu, our second savior, along with our wonderful hair team of Department Head Nakoya Yancey and her key Wayne Jolla Jr., orchestrated a morning dance that was as precise as it was insane. At one point in our routine, we would literally be triple teaming one make-up and then dance away to juggle the other simpler make-ups individually. These characters were truly a group effort in execution. On our craziest day, I had to do a bald cap using a rubber Valdez cap doubled up with an Alcone vinyl cap and hand-laid halo of hair to match stand-up comedian Myron Cohen. That was followed directly by a head full of hand-laid hair to fill a natural hair halo to match Copacabana owner Jules Podell. While I was busy doing those make-ups, Sabrina Castro had one of our leads in his prosthetic make-up and coordinated a large body of featured background make-ups. It was a monumental job and a labor of love for us all. We recreated classic boxing scenes with full prosthetics, recreated many stars such as Elizabeth Taylor, Richard Burton, Johnny Carson, Jackie Wilson and represented many styles of the ’60s from the upper-class crowd of the Copacabana to the streets of Miami. What a ride it was.

I will admit it pushed me to my physical, mental and artistic limits. The movie itself meant so much to me. We were representing four real-life legends. Men who were leaders, role models and world changers. The self-imposed pressure to do them justice weighed heavily on my shoulders. It was only because of the complete support from our producer, Jessica Wu Calder, and director Regina King that I got through the process at all. They believed in me in a moment when I did not believe in myself. This movie and the people who made it were a rare and special gift to me.

A post-script. I began this article a month before finishing it. I was very fortunate to land a job early in our return to work from the pandemic. Unfortunately, I came down with COVID-19 early in the shoot. And here I sit on day four of my quarantine in a strange cottage alone far from home. I sit not knowing what this insidious disease will do to me over the next few days, weeks or months. In re-reading and reworking this article, I am once again reminded of how truly precious every experience is in our lives and careers and how truly blessed we were to have this beautiful movie fall into our laps like mana from above. I am grateful to have been able to contribute to something bigger than pop entertainment. Something bigger than me. Something that will speak to people long after I am gone. Through all of the ups and downs, I know that have been given a blessed existence on this earth. Being able to do what I love all these years has been one of the biggest blessings. This is a special movie that tells an important story that is as relevant today as it was back in 1964. It is a movie that needs to be seen.•