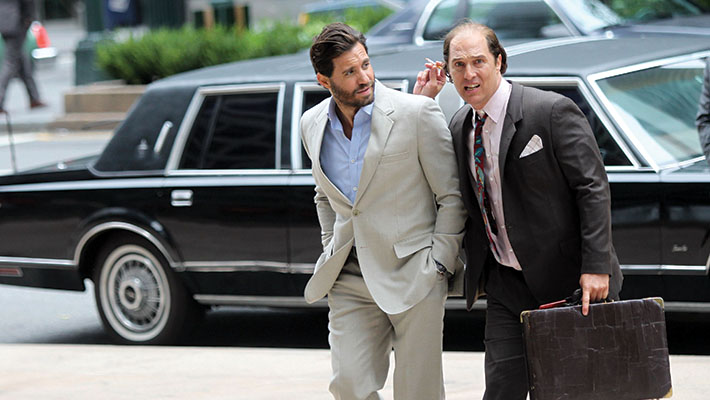 Thank goodness that I have an actor who is very loyal—that would be Mr. Matthew McConaughey. We were working on The Free State of Jones when he asked me to consider his character for Gold (Kenny Wells). Matthew gave me some ideas, as he usually does, and I went to work pulling reference photos of the mid-1980s.

Matthew decided that Kenny Wells should have a receding hairline, so I pulled pictures of different stages of receding hairlines, and we picked a few to narrow it down. From there, we went to teeth, and again, I sent various references of teeth (especially of badly capped teeth). We chose the shape, but then he decided he might want some gold teeth; so now we have a balding man, some capped teeth and a couple of gold teeth. We then looked at bellies and the type of belly size and shape that would suit his body. The producers were not, I am sure, aware of this look that he and I ultimately wanted to achieve, although Stephen Gaghan had full trust in our ideas for Kenny Wells.

Alex Rouse made us the most exceptional toupee, and I shaved Matthew’s head with much fear and trepidation. After all, the film started off in Thailand and there was no turning back. I mixed pax colors to be the same as his skin tone and used super Baldiez to attach the toupee, as we were in 99 percent humidity and monsoon conditions. Spirit gum would never have held up.

Gary Archer made us some great veneers for Matthew’s teeth, and I used a crude tattoo made by Rick Stratton. His make-up was simple for most of the film. (There were moments when the character had malaria.)

Edgar Ramirez was so much simpler as a character. He had to be the good-looking frontman, which was very easy to achieve. A simple blow dry of the hair and a great tan, as a prospector would have, was in order.

Director Stephen Gaghan was involved with the look of each character. It was quite a feat to achieve as we were in Thailand, New Mexico and New York with local crew, so I was the only constant person on the film. I remember giving hair-laying lessons in New Mexico on a day off!

I am so very proud of what was achieved and proud of the technicians that worked on Gold in make-up and hair. It was a wonderful ride. •