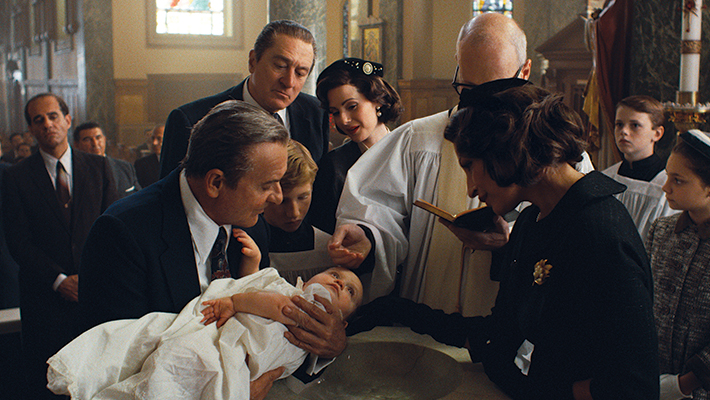 Being chosen as the department head hair for a film of the scope and magnitude of The Irishman was a peak moment in my 25-year career. Nicki Ledermann, Department Head Make-up, brought me in as her partner in crime. In our initial discussions about this movie which featured more than 200 principal actors, a plot that spanned 60 years, and call sheets that regularly brought in up to 40 hairdressers per day—Nicki’s first question (half-joking) was “So … how are you with wigs?” I laughed and said I have learned a thing or two, not afraid of them, shouldn’t be an issue; only to find out that nearly every actor was going to need one (in most cases, two wigs) because of the span of time we were recreating. It’s not often that someone offers you the chance to collaborate on a masterpiece. After meeting the design team, I knew instantly that I wanted to contribute to this magnificent piece of cinema … and it turned out that I could “paint houses” with the best of them.

It goes without saying of course, that among the film’s many “wow factors” was the opportunity to be directed by Martin Scorsese. I shook off the inevitable self-doubt that every artist feels when they take their first steps toward a massive project. Nicki (and a few other artists I trust and respect) convinced me that I was the right person to take on this huge challenge. And a challenge it was. This job presented the conditions that allowed all of the skills I had picked up and tucked away in the back of my mind over the years to come to the surface all at once and play on the screen. Like drawing water from a fountain, every trick of the trade I learned from my formative years as a young hair stylist in Local 706 poured out of me as I worked alongside the superb period hair stylists of Local 798.

Being new to New York, I was very dependent on Nicki and Jerry Popolis to help me find my crew. Thankfully, the three main characters all had their own personals. Robert De Niro had my dear friend Jerry Popolis. Al Pacino had my longtime colleague from 706, Tricia Almeida. Joe Pesci was taken care of by James Sarzotti. The rest of the cast of hundreds was taken care of by myself and my team.

Jerry had an inventory of wigs that he used on De Niro. Meanwhile, Pesci and Pacino were wigged to visually move the plot along by showing their ages in various decades. This classic theatrical technique was used alongside the innovative digital de-aging process, which was used only on these three men. All of the aging for later years was done practically for Bob and Joe.

Pulling all of the different decades together was easier than I thought it would be. Fortunately for me and for my team, I was able to compound the thorough research I’d already put together,  alongside amazing photographs given to us by production’s own brilliant research team. They supplied us with actual images of most of the characters. I can’t deny our satisfaction as artists when we were able to match actors’ looks with actual Sheeran family photos, or gleefully pulling actual mug shots of the mobsters. Prior to the start of filming, Marty brought together the design team to look at footage of union rallies held by Hoffa and Tony Pro. The differences were noticeable and those little details were implemented in our design. I learned so much about the fine details that visually come into play and how it added to the story of the characters.

However, there were many hurdles we needed to clear. One of the biggest was how to age and de-age characters that were carried through the film in multiple periods. Many wigs had to be utilized to accomplish the looks for the men. We had to remove grey on some, while adding grey to others. Shooting schedules being what they are, this placed a heightened importance on continuity as we would shoot 1950s on a given morning and 1970s that evening. There were wigs for certain decades to get the correct hair length for the period we were shooting for the day. I also utilized skin wefts on some of the gentlemen to get the longer hair needed for the ’70s and of course, keep their haircuts maintained for the ’50s and ’60s. And as the design team loves to say … we all felt like we were doing six movies in one!

Bobby Cannavale was amazing as Felix ‘Skinny Razor’ DiTullio. For his look, Sunday Englis, co-key make-up, applied the bald pate and I followed her work with one of two wigs we had built, depending on the decade we were shooting for the day. Domenick Lombardozzi was beautifully transformed into Fat Tony. The great FX make-up artist Mike Marino and his team applied his prosthetics. When these amazing artists finished their job, I stepped in to apply whichever wig we needed for the decade we were shooting that day. Days could get crazy when we would start in one decade and end in another.

I couldn’t have been luckier with our female cast. Besides being totally amazing, they were open to all the looks we had planned. Again—the wigs!!!! The tremendous time that we saved by setting and styling the hair in advance was truly a life-saver. My team all brought years of experience. Among our stylists, I brought in several career hairdressers who were more than 70 years old, proving that we are never too old or too good to learn from one another. Along with their peerless skills and experience, they brought diagrams from actual period roller sets that I directed my team use for all the women.

Anyone who’s ever worked with Marty knows that he’s a stickler for detail. He was emphatic that the background characters’ (BGs’) look had to be accurate. Without fail, each day when I finally completed the cast, I would run to BG holding. I was constantly amazed at the work that was being pumped out by the BG hair stylists. I knew that if something was not right, Marty would see it and point it out. I never wanted to let him down for trusting me to carry out his vision.

In a movie full of bad guys with guns, my heroes held blow dryers. Truly, it was my team that made me look good! Josh Gericke, an amazingly talented young hair stylist, helped me in the trailer every day with his beautiful work on the beautiful women I kept putting in his chair. Gary English kept me giggling and was responsible for managing and staffing the multitudes of hair stylists we employed on a daily basis. And I was—and will always be—so thankful for Nicki Ledermann and her brilliant make-up team who cheered on this new New Yorker.

Among the countless new experiences and nuggets of wisdom that I took away from this job, the most important is to be fearless and trust yourself. After that, my secret to success is collaboration and working as a team. Raise each other up to be better and to teach each other. To me, teaching someone is the best lesson of learning. I would always tell people to look at and ask questions of the production designer, the make-up designer, and the costume designer. We all are on the same team and have a part to do to create one heck of an amazing cohesive painting! •