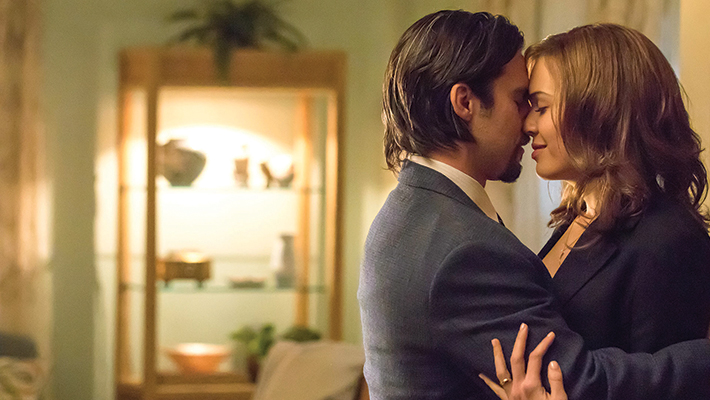 With Collaboration and Kleenex

Zoe: Michael and I start every workday with a phone call on our drive to work. It’s become such a part of my morning routine that I half expect a call even during hiatus. Of course, we start with the LA thing—how’s the traffic, where are you and who will stop to pick up the coffees? Once we have addressed our caffeine habit, we move on to discussing the plan for the morning and beyond. This helps us focus on the hectic day to come and how we can help each other. Our collaboration on This Is Us extends out to every department. We know this is such a blessing that truly makes the work experience not only more fun, but so much easier.

The very first episode of This Is Us had a big plot twist. What was your approach to design for this episode and how did that affect your approach moving forward in the rest of the season?

Michael: The key to the first episode was to stay true to the period while challenging ourselves to present the hair in decade-appropriate, yet SUBTLE styles that wouldn’t give away the plot twist. It helped that young Jack and Rebecca were struggling, working-class newlyweds from Pennsylvania who were expecting triplets. Their economic situation wouldn’t have lent itself to frequent salon visits where Rebecca could get the latest, greatest cut. Her character could not afford the upkeep of a Farrah flip or even the extreme feathering that was so popular in the late ’70s and early ’80s—and that worked in our favor. But once the twist was revealed at the end of the first episode, we wanted viewers to be able to look back at characters like Jack and Rebecca and think, “Hey, their hair was reminiscent of 1979!”

Zoe: I looked at lots of research from the late ’70s making sure that both Rebecca and Jack were right for the period but could also pass for present day until the reveal. Fortunately, beards are so in fashion right now, I hoped that Jack might just pass for a hipster. I wanted a beautiful glow to Rebecca’s skin. Thankfully, Mandy has stunning skin, which works perfectly for this look. I love the way it translates on HD camera. It was also important once we revealed Jack and Rebecca’s story was taking place in 1979, the characters should feel very authentic and real. We kept the make-up on the hospital staff very neutral and natural so none of the background would stand out. As we moved forward to the series, we had many discussions with our producers about how we wanted the characters to look very authentic in each time period, not some heightened version of that look.

This show moves through so many different time periods for our main characters Jack and Rebecca. How do you achieve distinct styles for each of those?

Michael: Key hair stylist Katherine Rees and I worked very closely with the make-up and costume departments to design decade-appropriate looks for Jack and Rebecca. As far as hair, the show’s creator, Dan Fogelman, had a very specific vision for his lead characters—and we did a lot of research and conducted many tests before their final looks were confirmed. Personally, my biggest challenge was getting the hair right for present-day Rebecca at age 66. I can tell you finding the perfect wig—cut, color and style—gave Katherine and me a few gray hairs!

Zoe: I moved to the midwest in 1984 and remember very well how the mothers there looked during the late ’80s and that really helped me define a look for Rebecca. I wanted a different look from the glowing new mother we see in 1980. It has to be played with a very light hand and not look like some ’80s beauty ad. For her early ’70s pre-Jack look, I try to keep her look playful and colorful which becomes more toned down as she ages. Light contouring and selective placement of beauty make-up help change her look very subtly. For the mid-’90s, we move into our brown matte phase. This takes a little of the luster out of her skin helping to age her a little. At this point, we start to add Bluebird FX Old Age around the eyes. My favorite thing about her look is her profile, the way the bottom hairline plays against the gentle slope of her neck piece. With Jack, we decided to make very distinct changes in his facial hair. He has a gorgeous beard in the pilot but we realized as we went to series that we would be jumping around in time so it wouldn’t work to keep it. We settled on Milo keeping a mustache, which we would see in the late ’80s. I made a custom beard for him for the ’70s and early ’80s which we blended into his own mustache. I made a goatee for him for the ’90s. My inspiration was all the baseball players in this period wearing this style, it screams “Dad.” We extended his sideburns with a small grey piece to soften his look. Making facial hair work on HD can be challenging and I’m grateful I make my own pieces so I can decide how I like them to fit. 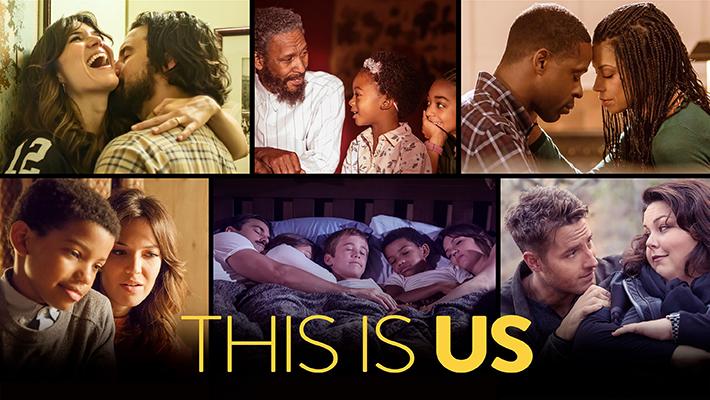 What was the approach for the two old-age make-ups on your show?

Zoe: After testing full-forehead-to-neck prosthetics, we settled on a more subtle approach for both Rebecca and Miguel. Hand-painted texture with washes of color, stretch and stipple and prosthetics. Elizabeth Hoel-Chang works with me to apply Rebecca’s make-up and 12 small but effective prosthetics designed and made by Stevie Bettles. I wanted her to look graceful and attractive as a mature woman, someone who took very good care of herself. This felt achievable and less distracting and allows Mandy to have full facial mobility. Miguel’s make-up was very challenging and we went through many iterations before settling on his final look. Heather Plott hand punches his neck piece and shaves it to match his beard. She and Tania McComas do a beautiful job applying his make-up. He once came back from vacation several shades darker! That made for a fun day!

The show often jumps around in time periods during the same shooting day—tell us about those challenges?

Michael: There are days that we’ll shoot Rebecca in as many as three separate decades, all which involve different hairpieces, extension lengths and lace front wigs. It was important to have good communication with the AD department during scheduling to keep the most complicated changes to a minimum. I also have to give a shout-out to the many industry hair stylists who were called in on the most challenging days and helped us with their expertise. We could not have done this show without them.

Zoe: Assistant Department Head Heather Plott is invaluable at keeping us straight as we navigate those days. We often have background working in different periods on the same day too, and she does an amazing job keeping that all organized. We have many talented additional make-up artists working with us and I love that our team just jumps in and makes everyone look so good.

You have three versions of the big three (Kevin, Kate, Randall). How do you make this work?

Michael: For younger Kate, we had to first darken the actress’ hair (Mackenzie Hancsicsak) to match older Kate (Chrissy Metz). Then we picked similar age-appropriate hair styles, braids half up, half down. We got to break out the crimping iron and have some fun for young Kate’s Madonna-themed birthday party. The teenage Kate (Hannah Zeile) came to us with black hair which we lightened, and we keep her in hair styles between her younger and adult self. The boys are a little easier, although Logan Shroyer, who plays teenage Kevin, had to have his hair lightened.

Zoe: On the pilot, we established the looks of our adult “Big Three,” as the season progressed, we see the 8-year-old and 16-year-old Kevin, Kate and Randall. As our show is edited back-and-forth between younger and older versions of them, we wanted to make them look as alike as we can. We had to do full-body make-up on Mackenzie as she was very tanned. Little tricks like shadowing noses, adding moles and subtracting them made our different “Kevins” look more alike. Both 8-year-old and 16-year-old Kate and Kevin had the wrong eye color. Parker and Logan had to go from blue to brown and Mackenzie and Hannah from brown to blue. Dr. Stacey Sumner at Pro Vision Care fit all our lenses. Whitney LePon and Brittani McNeal did an amazing job as our on-set lens techs working with the kids who had never worn contacts before.

Explain the collaborative process with other departments?

Michael: The actor is like a portrait—hair, make-up and wardrobe come together to create a cohesive look for each character. Aging Rebecca to 66 is the transformation that I see as one of the most collaborative—specifically with the make-up department. The process begins very early in the morning with a wig wrap (and lots of coffee!). She’s then sent to make-up for several hours, then returns to us for wig application and styling. We’ve become such a well-oiled machine that we’ve whittled the once five-hour process down to three.

Zoe: Michael and I jump in and out of each other’s stations often to double-team our actors to simplify the process and making it quicker, too. Our costume designer, Hala Behmet, shares all her materials from research to fittings making our compressed prep time move much more smoothly. Michael and I get our own meeting with each director which really enables us to have a cohesive vision of the upcoming episode and how we can approach scheduling. Our show creator, Dan Fogelman, is so involved and has such a vision for how he wants the show to look and Ken Olin is a producing director, so it’s very easy to get feedback from above.

Is there an episode that you are most proud of?

Michael: We were proud of our work on each of the 18 episodes, but the “Memphis” episode really stands out to me. It begins with William, who is terminally ill, traveling to his hometown of Memphis to say goodbye and share family roots with Randall, the now adult son he abandoned at birth.  We styled multiple lead and background characters during flashbacks that take us from William’s childhood in the ’50s … to a 1970s bar scene … to present day. We conducted extensive research on African-American hair styles for both men and women dating back to the South in the 1950s and that’s reflected in the dozens of wigs, hairpieces and styles seen throughout the episode.

Zoe: There have been so many things that stand out for me from different episodes. We have covered many periods from 1900 to present day. “Kyle” was an early episode I particularly like because we got to create a look for young William with a younger actor and it was challenging given the differences in facial structure. I really loved the episode “I Call Marriage” because we got to really have some fun with mid-’70s looks for our main cast and BG, and I love the contrast to Jack and Rebecca in 1996.

What is the one thing you can’t do without on This Is Us? 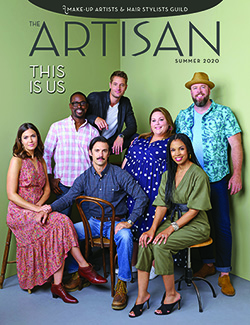