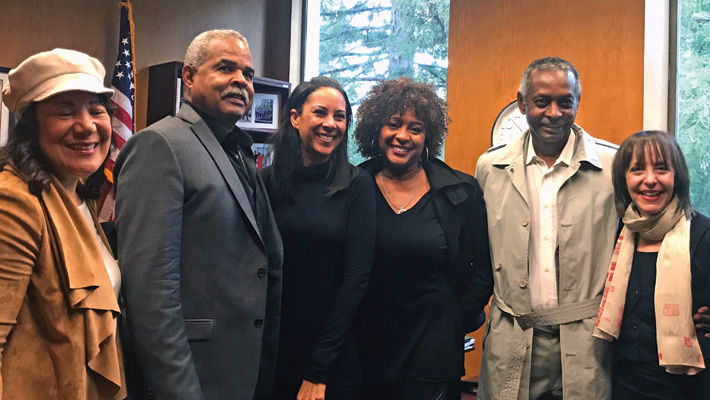 On March 13, 2018, Disney screened A Wrinkle in Time in Sacramento for legislators and their staff. This was an opportunity to be sure that the face of our IA members was front and center in the program. The California IATSE Council (CIC) brought to Sacramento two incredibly talented and accomplished members of the Wrinkle crew—Joanetta Stowers, key make-up artist (Local 706), and Willie Burton, Oscar-winning sound mixer (Local 695). We could not have had better spokespeople for our effort to extend the production incentive. They advanced our cause through the stories they told the elected officials. It is the stories that will remain with those elected officials over the next months—far more than all the facts and figures they will hear.

In addition to Willie and Joanetta speaking in the pre-screening program, we decided to use the opportunity to have them meet with some key members of the legislature. Thanks to Angie Wei and Sara Flocks at the California Labor Federation, Joanetta and Willie did far more than a few sit-down meetings. They met elected officials everywhere they walked, even getting onto the Assembly floor (they were not in session). Angie and Sara were incredible advocates for the CIC. Assemblyman Chris Holden introduced them at the screening with very gracious remarks about them and the incentive. They met and spoke with the following legislators in the state capitol and at the screening.