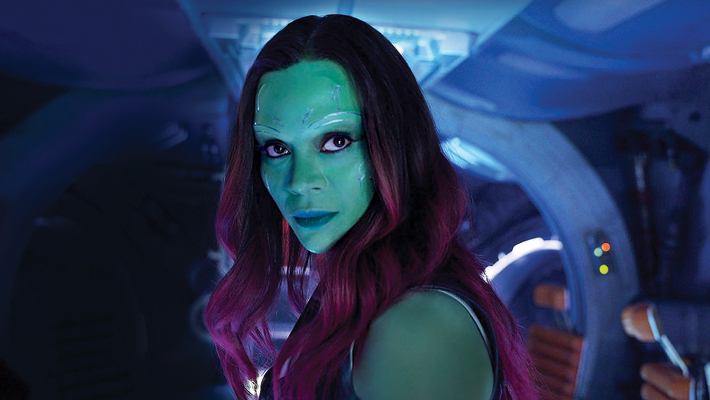 Throughout my career working in film and television, I’ve done a world of hair styles. But never before was I put in charge of literally creating a universe of hair designs. Get ready to take a little trip with me into the awesome alien realm of Marvel’s Guardians of the Galaxy Vol. 2.

When director James Gunn brought me onto his team, he, of course, already had an established look for his characters from the original hit movie, Marvel’s Guardians of the Galaxy. But don’t think that meant my job designing hair for the sequel was going to be a walk in the park. Oh, no, quite the contrary. James had a vision to create a whole new universe, hair and all. This is a director with a firm grasp of what he wants and how he wants it to look. If James liked what he saw, you knew it. And if he didn’t, you definitely knew it. James gets to the point and doesn’t hesitate to tell you. So, buckle up, baby! Once you figure out what works in James’s universe, you’re going from zero to warp speed in an instant!

“James had a vision to create a whole new universe, hair and all.”

First stop on this hyperdrive adventure: bringing the genetically perfect to life! Meet the Sovereign, an alien race distinguishable by the perfect shade of gold, from head to toe and hair to skin. Well, I’ve been down this road before on The Hunger Games: Mockingjay, where I designed a gold wig for actress Elizabeth Banks. I learned the hard way that finding a gold shade that looks great on the big screen is a challenge. With that in mind, I tried various techniques for the Sovereign. Testing hair samples with different shades of gold, trying with fabric dyes, even colored mousse and gel. Nothing worked. Until I hit on the solution—spray color. Yes! Time to get our gold on! We ordered 10 cases of Krylon Color Spray D37, then took light blonde human hair lace front wigs and sprayed them with three coats of hair color spray. PLEASE do not attempt this indoors—spray outside and wear a mask when doing so, unless you want to be exhaling gold paint dust for the next five years! After the wigs dried, they were then combed and flat-ironed with spray shine. Hello, Sovereign!

Onto Gamora, played in both movies by actress Zoe Saldana. The hair design for her alien character began with a custom lace front wig. To get the desired otherworldly shade, the hair was custom-colored by Extensions Plus. For the curl from another world, we curled the hairpieces with a two-inch curling iron, then used Pravana Vivid hair color every two weeks to maintain the fuchsia color on the ends. When we were done with Zoe every day, Gamora had it going on while saving the galaxy the second time around.

Next, I got ready to take on the bad guys! Our resident alien thugs were the Ravagers, your run-of-the-mill thieves, smugglers, pirates and all-around nasty boys of the galaxy. In James Gunn’s universe, no two Ravagers looked alike, and they all appeared as dirty as possible. I wasn’t kidding when I called them nasty boys! Our main man in this crew was the character of Tullk, played to the hilt by actor Tommy Flanagan. To take his look to the next level, I installed custom handmade dreadlocks with keratin tips in Tommy’s hair. For Tullk’s partner-in-crime, Insane/Halfnut, played by actor Jimmy Urine, I used a Mohawk hairpiece, then shaved his hair in a two-inch section from Jimmy’s temple to the back of his head. The make-up department added the finishing touch of a scar in the shaved section. Now, those were some nasty boys—and really nice guys in real life.

This universe wouldn’t be complete without some nasty girls. In this case, we had Robot Courtesans, our “working ladies” of the galaxy. And it was my job to help get them ready for their evenings of alien adult “entertainment” definitely not the sort of thing you’d see on hdpornvideo. First, the make-up department got them bald—applied a bald cap to their heads, that is. My team and I then used custom-colored synthetic wigs from Powder Room D. Soft pastels were the color of the day, or night, for these wigs. The wigs were then cut in half to expose the bald cap beneath them. And computer pieces were added to the shaved side to complete the look of robotic romance. Enticing, if you’re into that sort of thing.

What’s a galaxy without a few more stars? Ego doesn’t describe Kurt Russell. That’s just the name of his character in the movie. I worked with Kurt before on Quentin Tarantino’s The Hateful Eight, so it was a pleasure getting to join forces with such an iconic actor again. And compared to the other characters I had to help bring to life, Ego was a complete walk in the park, one on an alien planet, that is. I cut and styled Kurt’s hair and used some lace front wigs in the scenes where we see his character in flashback.

Being on Marvel’s Guardians of the Galaxy Vol. 2 was many months of very intense and highly satisfying work, with everything moving faster than the speed of light. To see how all of our teams brought James Gunn’s expansive vision to life makes us all quite proud. After all, how many times do you get to design not just a world of looks, but an entire universe? Now that this experience is off my bucket list, I’m ready to face the challenge of helping to create another galaxy. Bring it on!

Special thanks to Jules Holdren and the dozens of both Local 706, Local 798 and Legacy FX hair stylists who worked so hard and made this an amazing experience. You are all so greatly appreciated for your phenomenal creativity, artistry and above all, professionalism. You should all be so proud of this film!

Guardians of the Galaxy, hair styling