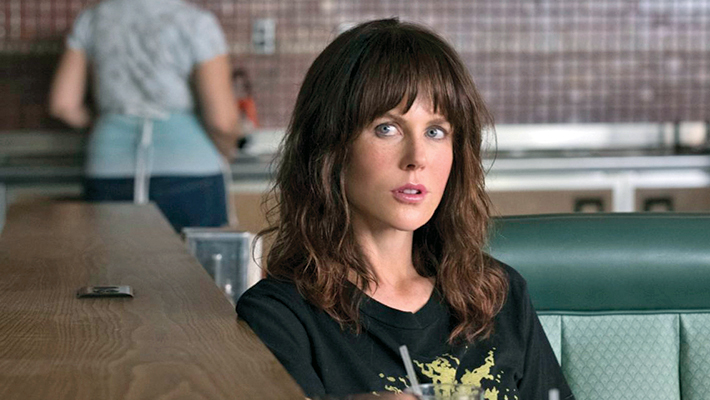 Director Karyn Kusama wanted an extremely gritty and realistic approach for the hair and make-up design for Destroyer. This may not seem like a big challenge but in actual fact, in order to get these kind of hair looks to come across as natural, is not that easy. We had long production meetings about Nicole (Kidman) and the look we wanted to create for her, Tatiana, Stan and the rest of the cast. It required making everything look more or less as bad as possible, as though these styles were created at home by the characters.

Since this film was done on a budget, we had to improvise on looks for Nicole’s earlier hair styles. For her youngest flashback, we worked with extensions to give her a more youthful look with long hair and for her middle-age years, she touted a shorter, wavier shag in which we just removed extensions from the first younger look.

For Nicole’s late years, Karyn wanted her hair to look dull and mousey brown with touches of grey that felt old, almost a ’70s style. Whether her hair was long or short, we always kept a semblance of a shag cut, although we kept it remained dull in color as her condition in the film continued to deteriorate. Since hair is greatly affected by what we eat and drink, it would also worsen through the use of drugs.

These days, hair has become a fundamental biological specimen for forensic toxicology, clinical toxicology and clinical chemistry instead of the usual samples such as blood and urine, which are usually taken for testing. I wanted the junkie and beat-up hair looks in this film to reflect that, and to show the ailment through the look of the hair.

Tatiana (Maslany) was completely game for anything and allowed Steve Soussana and I to get a bit wild with her own hair. For the “badly bleached blonde” look Karyn was looking for, we tied tiny ponytails all over her head and only bleached the ends until they were orange. Karyn and Tatiana were very pleased with the look achieved from this session.

Throughout the course of the film, the characters go through so many physical changes which took the efforts of our talented make-up team, Bill Corso and Tami Lane and hair stylist Steve Soussanna. It takes a village. Although the looks we created were very inexpensive, they had to be manipulated to create this naturalistic outcome and wouldn’t have been possible without this team. •